There’s a neat editing trick that can quickly turn an unattractive draft blog into one that will instantly hook readers.

To ‘flip’, simply swap the first and last paragraphs of your draft blog. END_OF_DOCUMENT_TOKEN_TO_BE_REPLACED

END_OF_DOCUMENT_TOKEN_TO_BE_REPLACED

Mailchimp recently asked me to fill out a survey about how it could be improved.

Where to start!? The temptation was to flood them with a long wishlist of things I’ve identified since I started using Mailchimp. But that would have taken ages, and the longer the list, the more likely the Chimpsters would be to ignore it. (Am I kidding myself that they are really going to listen to me?)

So I honed my list down to four Mailchimp improvements that would really really make my life easier. Here they are.

END_OF_DOCUMENT_TOKEN_TO_BE_REPLACED

You’re running regular A/B tests. You’re getting invaluable insights into what really engages your audience. You know there are insights that other teams could use, and you don’t want your results to be buried in monthly reports that nobody reads.

How can you make sure your colleagues – and your managers – know about your amazing, insightful test results?

END_OF_DOCUMENT_TOKEN_TO_BE_REPLACED

If you have ever scheduled an email in Mailchimp, you may have noticed the option ‘let MailChimp optimise send time for maximum engagement’. This is the Chimp’s ‘send time optimisation’ function. Seems like a great idea. But does it work? I ran a couple of tests to find out. Here are the results.

END_OF_DOCUMENT_TOKEN_TO_BE_REPLACED

Citation counts are a quick, if simplistic, indicator of academic impact.

But how many citations are good quality, and how many are low quality, or ‘junk’ citations? I decided to find out.

Using Google Scholar, I reviewed the citations for two of my academic peer-reviewed journal articles. The articles had a combined count of 110 citations. END_OF_DOCUMENT_TOKEN_TO_BE_REPLACED

You’ve seen the advice to develop ‘personas’ for segments of your audience. Maybe you’ve tried to work up some personas for your non-profit. If you found the process difficult and the results sketchy, consider these five personas. Right now, they’re looking at your website and social media feeds and wondering whether – and how – they should engage with you. END_OF_DOCUMENT_TOKEN_TO_BE_REPLACED

The data you use to evaluate your organisation’s social media strategies are important: they are the lens through which you view the success or failure of different strategies. So it’s important the measures you use are accurate, reliable and fit for purpose.

There are two pitfalls in particular that you need to avoid when measuring social media reach over time. To illustrate these pitfalls, consider the following example for an imaginary organisation wanting to evaluate the impact of a new social media strategy on its Facebook reach.

END_OF_DOCUMENT_TOKEN_TO_BE_REPLACED

The popular use of the term ‘human capital’ is too narrow and will soon become redundant. It needs an overhaul. Here’s how to fix it.

If you’ve ever heard an economist talking about ‘human capital’, it’s more than likely they defined the term as the ‘skills and knowledge’ embodied in people, the result of ‘education and training.’

END_OF_DOCUMENT_TOKEN_TO_BE_REPLACED

A fond hello and thanks to those people who have recently subscribed to follow my blog. I am honoured you have found artspolicies.org useful and interesting!

However, I should let you know that I’m not actively posting new items at the moment – I have too many competing imperatives and simply don’t have the time. Perhaps one day I will get the chance to write again – it would be great to share ideas with you.

Amphibian populations have been rapidly disappearing worldwide. Nearly one-third of the world’s amphibian species are on the verge of extinction.

Events are taking place all around the world – including in Australia and New Zealand, where we have some amazing and highly threatened amphibians. Read more about them at my previous post, Save the Frogs Day.

An Australian Great Barred frog with a leech. Photo from photolucide.com

The number of animals killed or physically ‘challenged’ in Australian research has continued its merciless rise.

In 2009, 1.46 million animals were subjected to either death or physical challenge through research procedures in Australia – this equates to nearly a third of all animals used in Australian research.

When 2009 figures are compared to 2005, the number of animals made ‘unconscious without recovery’ has doubled; the number experiencing ‘major physiological challenge’ has more than quadrupled.

Australian research seems to be on an unrelenting, merciless march toward greater animal cruelty.

The table below shows the number of animals used in Australian research and teaching by severity of procedure, and the percent increase from 2005.

The data come from Humane Research Australia (HRA), gathered from a variety of sources. HRA points out that there are serious gaps in the data, not least because data are not available for Queensland, Western Australia or the Northern Territory, and data from the ACT do not provide a breakdown by type of procedure.

Another interesting trend is a rise in the production of genetically modified animals. From 2005 to 2007, the number of genetically modified animals produced under Australian research ranged between 4 and 5 thousand animals. In 2008 this number rose dramatically to over 40,000 animals. And in 2009 it rose even more dramatically – more than doubling to over 100,000 animals. It is difficult to determine the level degree of cruelty or suffering experienced by these animals, but the sharp rise will add to the fears for those concerned for the welfare of animals. 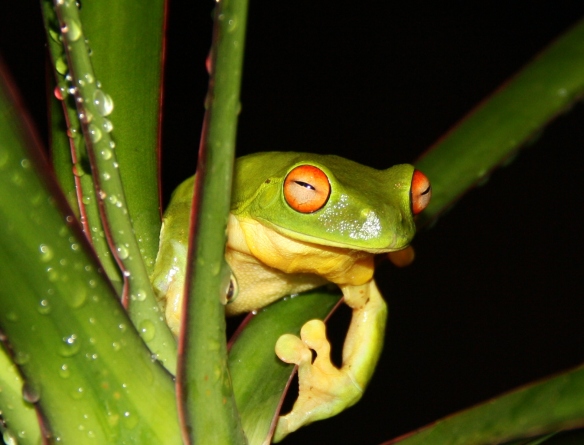 Frogs are in trouble. Around the world their numbers are dropping. Many of Australia’s and New Zealand’s amazing frogs species are under threat. Let’s work together to keep them from disappearing. April 28th is international Save the Frogs Day.

We need to take action to save our frogs from extinction. Save the Frogs Day is the world’s largest day of amphibian education and conservation action. Now in its third year, the day aims to encourage the appreciation and celebration of amphibians by people from all walks of life.

Addressing the amphibian extinction crisis
represents the greatest species conservation
challenge in the history of humanity.[1]

END_OF_DOCUMENT_TOKEN_TO_BE_REPLACED

The number of animals in Australia killed or physically ‘challenged’ by research procedures nearly doubled in three years.

The data come from Humane Research Australia, gathered from a variety of sources. HRA points out that there are serious gaps in the data, not least because reporting is patchy – a sign perhaps of the shame some States feel about being honest and transparent about these practices? Taken at face value, they show trends that will shock some and cause concern to many.

The proportion of animals subjected to death or physical ‘challenge’ by procedures increased from about one in six to one in every four animals (from 14 percent in 2005, to 23 percent in 2008).

There was almost a tripling in the number of animals subjected to ‘major physiological challenge’ by research procedures.

The summary table below shows the number of animals used in Australian research and teaching by severity of procedure, and the percent increase from 2005. View the full data here>

This site gathers together Christopher Madden’s publications on digital marketing, cultural policy and economics. Plus a few extras, including a full list of publications and professional history. I hope you enjoy.