How does artificial intelligence (AI) impact human capital? What capital do non-human animals have?

The common use of the term ‘human capital’ is too narrow and will soon become redundant. It needs an overhaul. Here’s how to fix it.

If you’ve ever heard an economist talking about ‘human capital’, it’s more than likely they defined the term as the ‘skills and knowledge’ embodied in people, the result of ‘education and training.’

This has become a type of shorthand definition, habitually rolling off economists’ tongues without a second thought. [1]

But there are at least three fundamental problems with the shorthand human capital. The problems are described briefly below, followed by one way to fix them.

1. Human capital is more than skills and knowledge

Skills and knowledge are just one form of capital embodied in human beings. People’s health can, and should, also be viewed as capital.

Historically, health has been recognised by economists as a form of human capital. Theodore Schultz’s watershed article on human capital, published in the American Economic Review in 1961, explores health expenditure as human capital investment.[2]

It’s easy to see how physical health can be viewed as capital. A person’s loss of physical capacity may reduce their ability to earn income, even if their skills and knowledge remain intact. Money spent on health – such as drugs and surgery – is, in a purely dispassionate market sense, an investment in maintaining the productivity of that capital.

The view of our bodies as capital may seem distasteful, or portray humans simply as economic machines. But the view in no way precludes the justification of health expenditure on moral or humanitarian grounds.

Characterising at least some health expenditure as an economic, rather than moral, investment improves our understanding of human capital.

And if physical health is a form of human capital, why not also our psychological health? Our emotional state can impact on our productivity as much as our physical state.

A more comprehensive and effective view of human capital would recognise three types of capital embodied in human beings:

If human capital, in its shorthand use, is the skills and knowledge acquired through training, what does that mean for animal learning?

We humans have harnessed animal learning for our own economic benefit. Early human societies domesticated and trained animals to compensate for deficiencies in their own skill set. We have harnessed the hunting instinct of wolves to train dogs to herd and retrieve. We have taught pigs to find truffles and dogs to find lost people.

Many of the economic tasks done by animals have been replaced by machines. So, over time, our exploitation of animals has shifted from harnessing their physical capabilities – their physical capital – to exploiting learned skills. Where horses were once used for transport, they are now used more for sport and entertainment.

Nowadays, we harness animal learning for often highly sophisticated tasks. We invest significant resources into training dogs to help the blind, to help identify disease in people, and to warn of their owner’s oncoming seizures. We even carry out tests on animals to understand our own mental capacity, our precious ‘human’ capital.

And there is a growing body of scientific evidence that non-human animals also have emotional lives. Will an upset guide dog or anxious dressage horse perform as well as a happy one? Owners who want to maximise the benefit they gain from their animal invest in the emotional well being of their animal. Just as with humans, that expenditure can be viewed economically as capital investment.

It does a terrible disservice to animals to ignore their learning abilities, the emotional lives they experience, and how important their physical exertion is – and has been – to our economic well being.

If we accept that animals have these forms of capital, it would be confusing – and insulting – to call them ‘human’. Much better to use a generic, non-speciesist term such as animal capital, or more accurately, non-human animal capital.

We are fast going to need to recognise machine learning in our notion of investment in skills and knowledge. Perhaps we’ll even need to consider the emotional states of machines, as they gain greater faculties for volition and independence from humans.

If the popular concept of human capital doesn’t capture all forms of capital embodied in humans, and is not unique to our species, or even organic life forms, what’s the fix?

We need a broader and non-anthropocentric concept of ‘human’ capital.

The quick fix is to separate capital type from the entity within which the capital is embodied. If that sounds confusing, hopefully the matrix below will clarify. (For more about this typology, see note 3) 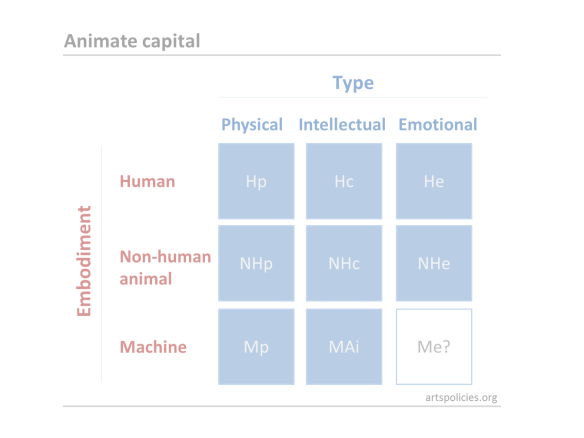 Now, references to ‘human capital’ will cover all forms of capital embodied in humans. If we want to focus one form in particular, we should clarify: if we want to talk about our skills and knowledge acquired through education and training, we should use the term ‘intellectual human capital’, rather than just human capital.

And when we use the term ‘intellectual’ capital, rather than ‘human’ capital, we’ll enrich our analysis, recognising that alternatives may exist beyond our species. We’ll pay homage to the animals whose skills we exploit, and avoid upsetting the feelings of the intelligent machines that will soon be in our lives. 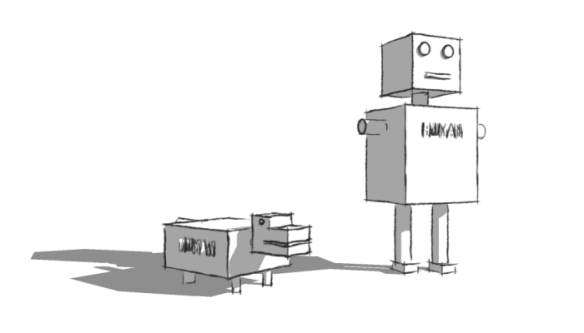 [3] Notes on the typology of animate capital